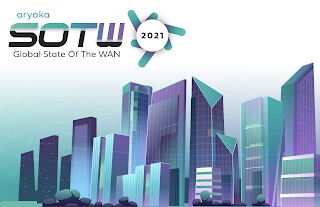 Aryaka, a leader in fully managed Cloud-First WAN solutions, has released its sixth annual “2021 State of the WAN Report,” the industry’s foremost compendium of insights into global SD-WAN and SASE planning. Sixteen hundred information technology (IT) enterprise decision makers across global enterprises answered the survey, the largest response since its inception. Key trends identified in the report include:

“This year’s Aryaka State of the WAN includes many valuable insights backing up trends we see in the industry. These include the effects of hybrid work, with 75 percent projecting a quarter of their employees to remain at least part-time remote, and cloud connectivity demands skyrocketing with 51 percent planning to move away from traditional data centers over the next two years. Both initiatives will require more sophisticated network-as-a-service (NaaS) solutions with integrated security offerings,” said Scott Raynovich founder and chief analyst of Futuriom.

Collaboration and productivity suites have gained traction. The Microsoft suite has gained momentum, with Teams identified by respondents as the most deployed application, growing its footprint by more than half, from 34 percent in 2021 to 58 percent this year. Conversely, Google Docs dropped from 41 percent last year to 35 percent today with Microsoft 365 now at 55 percent.

A renewed interest in ROI was reflected in this year’s report, with 36 percent of respondents having cost concerns, an increase of 16 percent vs last year. Though budgets are expected to increase by 25 percent, for networking and security, the focus on ROI implies these increases must be spent judiciously.

Aryaka to Host 2022 The State of the WAN Webinars

Join Aryaka at these dates/times for a lively panel discussion on the “Aryaka 2022 Global State of the WAN.” Regional observations will also be presented:

For more on Aryaka, visit: https://www.aryaka.com/

Bruce Christian - May 20, 2022 0
CONTRIBUTED ARTICLE By Lyndon Brown As adversaries advance their tradecraft to bypass legacy security solutions, the combination of world-class technology combined with expert threat hunters is...