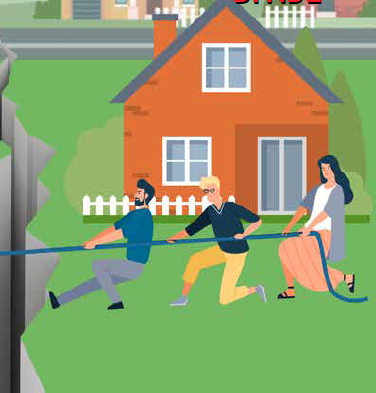 Employers and employees to face new battles and a changing relationship

Up to this point, enterprises by and large have been rather accommodating when it comes to remote and off-site work arrangements, at least for employees in which remote work is possible and practical. Of course, the seemingly endless stream of virus surges, variants and vaccine mandates have required patience and sacrifices from everyone. Assuming, however, and this writer is still hopeful, that a true post-COVID era eventually arrives, there are indications that employers want a return to something very similar to pre-COVID workdays and operations. For many employees, on the other hand, there may be no turning back.

After all, corporate reactions to the pandemic – compounded by societal and government reactions –created a physical distance between “work” and “workers,” and in that space, employees had a chance to re-evaluate their relationships with “work” and their co-workers, as well as how and where their means of making money fits into their overall lives. For this significant group of employees, redefining the terms of the work relationship could get rocky.

Consider, for example, that about the same time four in 10 companies surveyed by Digital.com said they would fire workers who won’t return full time to the office, Morning Consult and Bloomberg News reported that 39 percent of workers surveyed would consider quitting if their employers weren’t flexible about remote work. And while four of five remote workers believe they would be most productive if they could choose to work remotely or in an office as needed, including roughly two in five who strongly believe this, about six in 10 managers surveyed said they prefer workforces to be on site.

“Today, this process of evaluation is surfacing discordant views on returning to work,” said analyst at McKinsey & Co. in a recent report on corporate acceptance of hybrid work arrangements. “Tomorrow, it may well surface as reduced engagement, greater unwillingness to work longer hours and attrition.”

All too many enterprises, said McKinsey & Co. analysts, still hope to reach a type of “finish line,” represented by the arrival of a new, established – but largely familiar – normal that will become the standard for years to come. Reaching this finish line, business leaders have surmised, is simply a matter of figuring out logistics such as the number days in the office, proper collaboration tools, adjustments in pay and establishing norms for meeting behaviors. Sure, some amount of hybrid working seems inevitable, at least in cases where it makes sense or real estate savings can be gained from shared or reduced workspaces. And while employers realize the great work-at-home experience was largely a success, “they also believe it hurt organizational culture and belonging,” argued McKinsey analysts.

Some of these concerns may, in fact, be valid. More than three-quarters (77 percent) of on-site workers said they engage in spontaneous conversations with teammates during a work week compared to 60 percent of remote workers who said the same, found a February 2021 survey by ADP Research Institute.

“This is particularly stark for women, who note a much lower rate of spontaneous conversations when working remotely,” noted ADP analysts.

Remote workers were similarly more likely to report difficulties in connecting and communicating with managers, showed ADP findings, while at-home workers also reported difficulties with work/life boundaries, deterioration of work social networks and a weakening of their sense of belonging, McKinsey researchers added.

Top 10 Factors Important to Working Life After the Pandemic

“[Employers] are hungry for employees to be back in the office,” said McKinsey analysts, “and for a new normal that’s somewhat more flexible but not dramatically different from the one we left behind.”

To say all or most employees are as enthusiastic about a return to pre-2020 work arrangements would be an overstatement. According to an August poll of more than 300 employees by technology provider Bold Business, nearly 70 percent of respondents said they prefer full-time remote work, with a full 93 percent preferring remote work in some capacity. A separate survey by Sungard Availability Services, meanwhile, found that 95 percent of current remote workers do not want to return to the office at all, and more than 80 percent of workers recently surveyed by the Conference Board said work arrangements such as flexible hours and work location were important in their decisions to find a new job, including 60 percent who said they were “very important.” More than four in 10 workers surveyed by the Adecco Group said they feel or have felt a lot of anxiety about returning to the office.

The recent work arrangements have become so desirable to U.S. workers that 56 percent of those polled by Sungard said they would take pay cuts to keep their current work conditions in place. A similar 52 percent said the same in a survey by home retailer homedit.com, including 45 percent who said they would quit if they were not allowed to work remotely full time.

These workers may want to be careful about what they wish for, however, as up to 68 percent of businesses are debating whether or not to introduce pay cuts for staff who choose to work from home, according to a survey by HR software provider CIPHR.

“The disconnect is deeper than most employers believe,” said analyst at McKinsey & Co., “and a spike in attrition and disengagement may be imminent.”

Perhaps the most obvious chasm between work and workers are expectations for the split of days between in-office and at-home among employees who will function in a hybrid arrangement. A cross-section of surveys suggests that a large majority of C-suite executives expect hybrid workers to be in-office three or more times a week, while around half of employees would like to work from home three or more times weekly. That difference in a day or two surely isn’t insurmountable to resolve, but it does represent 20 percent to 40 percent of all working hours.

Whatever the number of days settled upon, what might be more important is the actual control of those days. From workers’ perspective, a top benefit of remote and WFH, and what will likely be missed most, is flexibility. Employees have enjoyed the ability to control where and when work gets done, sometimes intertwining work and personal time in ways never possible before.

Homedit.com’s recent poll of more than 1,300 employees, for example, asked about the benefits of working remotely that workers wish they could bring to the office. A “flexible schedule” was far and away the top answer, cited by 54 percent of respondents. Likewise, when folks were asked to name the “main benefit” of working remotely, “more family time” topped the list at 27 percent. That’s twice the number who cited “no commute” as the top benefit.

And according to a report from Adecco Group, more than three quarters of workers, after enjoying increased autonomy over their schedules during the past year or so, want to retain that flexibility over their own schedules, going back into the office but on their own terms. “This is especially strong for younger generations and parents,” said the research firm.

A failure by employers to accommodate some level of flexibility in schedules and work arrangements will not be easily accepted, either. Quite simply, employees have witnessed first-hand that companies can adjust and adapt to remote work needs when necessary, sometimes even quicker than previously thought possible, and productivity can be maintained in WFH and hybrid situations. 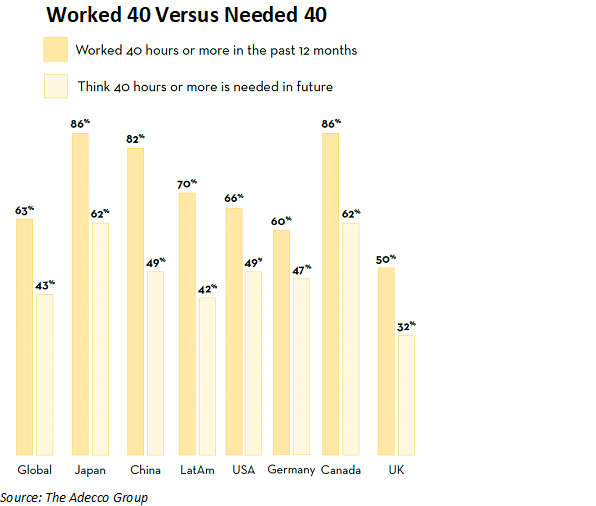 “Now that the genie’s out of the bottle, there’s no putting it back in,” said Chris Fielding, chief information officer at Sungard AS. “As employees place greater stock in flexible working, organizations must adapt or risk losing talent. This involves everything from a top-down cultural shift to ensuring workers have the tools and resources they need to be productive and secure from anywhere.”

“Employees have embraced the flexibility that tech-enabled remote working has made possible,” agreed Daryl Wright, a partner at Ernest & Young Canada. “And they don’t expect it to stop in the aftermath of the pandemic.”

Indeed, shifting attitudes among employees even have led to a questioning of the standard 40-hour work week. Adecco’s global survey of nearly 15,000 employees across 25 countries found that nearly three-quarters of respondents (72 percent) want employers to revisit the length of the working week and the number of hours people are expected to work, with more than half (57 percent) now believing their job can be done in less than 40 hours per week. Among U.S.-based workers, about half of respondents believe they would be able to complete their weekly task in less than 40 hours.

This article originally appeared in Fall 2021 issue of RWS Magazine